6.7 THE QURAN ON STAGES OF HUMAN EMBRYONIC DEVELOPMENT

Scientifically Proving That Quran Is Word Of God and Responses From Our Non – Muslim Brethren:

1. First Proof – Life From Water in the Quran

3. Third Proof – Pairs in Plants in the Quran

4. Fourth Proof – Divisibility of Atom in the Quran

5. Fifth Proof – Creation of the Universe from Smoke in the Quran

6. Sixth Proof – Iron from Outer Space in the Quran

7. Seventh Proof – Stages of Human Embryonic development in the Quran

The Quran On Stages Of Human Embryonic Development:

This is the seventh proof that i am providing in my quest to prove that Quran is from God. In the Holy Quran, God speaks about the stages of man’s embryonic development:

The above verse gives the following steps in the human embryonic development:-

The first statement simply signifies that human beings are essentially composed of extracts of earth namely organic substances, minerals and salts etc. This is a general statement that is applicable to all living things. The second statement refers to the fertilized egg that is firmly lodged in the womb.

The third and fourth statement is where the scientific miracle unravels. It says “Then We made the drop into an alaqah (leech, suspended thing, and blood clot)”

Literally, the Arabic word alaqah in the above statement has three meanings: (1) leech, (2) suspended thing, and (3) blood clot.

In comparing a leech to an embryo in the alaqah stage, we find similarity between the two as we can see in figure 1.

Also, the embryo at this stage obtains nourishment from the blood of the mother, similar to the leech, which feeds on the blood of others.

– Human Development as Described in the Quran and Sunnah, Moore and others, p. 36. 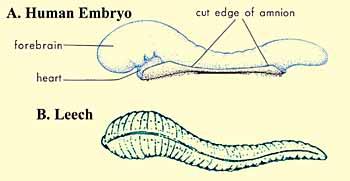 Figure 1: Drawings illustrating the similarities in appearance between a leech and a human embryo at the alaqah stage. (Leech drawing from Human Development as Described in the Quran and Sunnah, Moore and others, p. 37, modified from Integrated Principles of Zoology, Hickman and others.  Embryo drawing from The Developing Human, Moore and Persaud, 5th ed., p. 73.)

The second meaning of the word alaqah is “suspended thing.”  This is what we can see in figures 2 and 3, the suspension of the embryo, during the alaqah stage, in the womb of the mother. 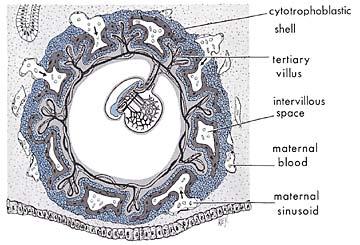 Figure 2: We can see in this diagram the suspension of an embryo during the alaqah stage in the womb (uterus) of the mother. (The Developing Human, Moore and Persaud, 5th ed., p. 66.)

Figure 3: In this photomicrograph, we can see the suspension of an embryo (marked B) during the alaqah stage (about 15 days old) in the womb of the mother.  The actual size of the embryo is about 0.6 mm. (The Developing Human, Moore, 3rd ed., p. 66, from Histology, Leeson and Leeson.)

Figure 4: Diagram of the primitive cardiovascular system in an embryo during the alaqah stage.  The external appearance of the embryo and its sacs is similar to that of a blood clot, due to the presence of relatively large amounts of blood present in the embryo. (The Developing Human, Moore, 5th ed., p. 65.)

So the three meanings of the word alaqah correspond accurately to the descriptions of the embryo at the alaqah stage mentioned in the noble Quran.

Figure 5: Photograph of an embryo at the mudghah stage (28 days old).  The embryo at this stage acquires the appearance of a chewed substance, because the somites at the back of the embryo somewhat resemble teeth marks in a chewed substance.  The actual size of the embryo is 4 mm. (The Developing Human, Moore and Persaud, 5th ed., p. 82, from Professor Hideo Nishimura, Kyoto University, Kyoto, Japan.)

Figure 6: When comparing the appearance of an embryo at the mudghah stage with a piece of gum that has been chewed, we find similarity between the two.

A) Drawing of an embryo at the mudghah stage.  We can see here the somites at the back of the embryo that look like teeth marks. (The Developing Human, Moore and Persaud, 5th ed., p. 79.)

B) Photograph of a piece of gum that has been chewed.

Why is this a scientific miracle?

This is a true scientific miracle because: –

“Say: If the whole of mankind and Jinns were to gather together to produce the like of this Qur’an

Professor Emeritus Keith L. Moore (as of 1997) is one of the world’s most prominent scientists in the fields of anatomy and embryology and is the author of the book entitled The Developing Human, which has been translated into eight languages.   This book is a scientific reference work and was chosen by a special committee in the United States as the best book authored by one person.  Dr. Keith Moore is Professor Emeritus of Anatomy and Cell Biology at the University of Toronto, Toronto, Canada.  There, he was Associate Dean of Basic Sciences at the Faculty of Medicine and for 8 years was the Chairman of the Department of Anatomy.  In 1984, he received the most distinguished award presented in the field of anatomy in Canada, the J.C.B. Grant Award from the Canadian Association of Anatomists.  He has directed many international associations, such as the Canadian and American Association of Anatomists and the Council of the Union of Biological Sciences.

In 1981, during the Seventh Medical Conference in Dammam, Saudi Arabia, Professor Moore said: “It has been a great pleasure for me to help clarify statements in the Quran about human development.  It is clear to me that these statements must have come to Muhammad from God, because almost all of this knowledge was not discovered until many centuries later.  This proves to me that Muhammad must have been a messenger of God.” (To view the RealPlayer video of this comment click here).

Consequently, Professor Moore was asked the following question: “Does this mean that you believe that the Quran is the word of God?” He replied: “I find no difficulty in accepting this.” (In the above tape)

During one conference, Professor Moore stated: “….Because the staging of human embryos is complex, owing to the continuous process of change during development, it is proposed that a new system of classification could be developed using the terms mentioned in the Quran and Sunnah (what Muhammad  said, did, or approved of).  The proposed system is simple, comprehensive, and conforms with present embryological knowledge.  The intensive studies of the Quran and hadeeth (reliably transmitted reports by the Prophet Muhammad’s  companions of what he said, did, or approved of) in the last four years have revealed a system for classifying human embryos that is amazing since it was recorded in the seventh century A.D.  Although Aristotle, the founder of the science of embryology, realized that chick embryos developed in stages from his studies of hen’s eggs in the fourth century B.C., he did not give any details about these stages.  As far as it is known from the history of embryology, little was known about the staging and classification of human embryos until the twentieth century.  For this reason, the descriptions of the human embryo in the Quran cannot be based on scientific knowledge in the seventh century.   The only reasonable conclusion is: these descriptions were revealed to Muhammad from God.  He could not have known such details because he was an illiterate man with absolutely no scientific training.” (View the RealPlayer video of this comment).

This article was taken from www.answering-christianity.com/ac.htm website. May Allah bless them all.

I hope you all send me your feedback on this article and i also hope that you strictly stick to the topic under discussion ie “THE QURAN ON STAGES OF HUMAN EMBRYONIC DEVELOPMENT”.

This entry was posted in Proving that Quran is from God and tagged 5th ed., alaqah, blood clot in quran, chewed substance in quran, creation of man from extract of clay, does the quran really say correctly about human embryology?, embrylogical sciences in quran, embryology, embryology in quran, error in quran about embryology, leech like clot in koran, Moore and Persaud, mudghah, p. 8, Professor Emeritus Keith L. Moore, Proving that Quran is from God, Quran 23:12-14, seventh proof, The Developing Human, The Quran On Stages Of Human Embryonic Development. Bookmark the permalink.

10 responses to “6.7 THE QURAN ON STAGES OF HUMAN EMBRYONIC DEVELOPMENT”